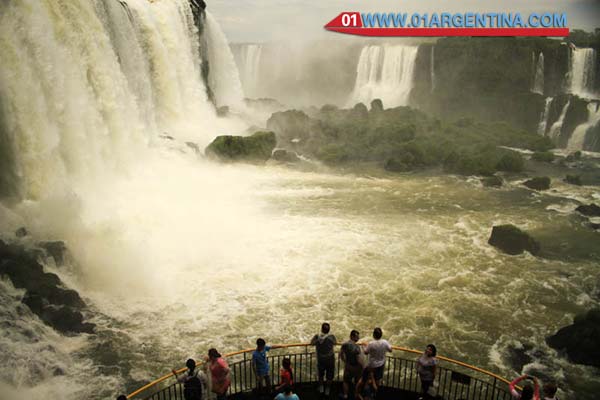 History, traditions, walks, typical dishes and an excursion on board suggest an entertaining circuit that completes the unmissable visit to the Iguazu Falls.

Beyond the domains of the Falls, whose devastating force makes its way into the few loopholes offered by the jungle of Misiones, any possibility of delineating a moderately interesting route seems to be diluted. But it’s a matter of having patience. In Puerto Iguazu, there is a variety of tourist attractions within the jungle of Misiones. Near the Three Borders crossed by the Iguazú and Paraná rivers, the original Guaraní culture merges with the baggage of European immigrants and the typical flavors are combined with historical sites, pre-Hispanic traditions, recreation and sites dedicated to the preservation of the natural environment. Here are ten suggestions to take the pulse of this unique place, wrapped in jungle and reddish earth in the generous geography of Mesopotamia.

The Falls
In the heart of the Iguazú National Park, the roar of the Falls attenuates any sound, to the point of minimizing it as a timid rumor. In this confines of Misiones wrapped in jungle and reddish earth, the waters of the Iguazú river come up agitated and they turn over from 275 jumps. The moving spectacle, which becomes an outbreak in the Garganta del Diablo, leaves tourists undaunted, whatever their origin. It fills their eyes, disturbs them and stirs up all their senses. The heartbeat starts to accelerate with the appearance on stage of the Dos Hermanas jump. They are three parallel falls of 30 meters of height, that go to stop to a piletón greenish and shake the flocks of magpies, thrushes, calandrias and carpenters.
The jungle deserves to draw its veil and the panoramic is soaked with the torrent fired by the San Martin jump, the central attraction of the Lower Circuit. The orange spots of the gomons that dare to expose themselves to the deluge are blurred by the water that also rises from the Escondido waterfall. After the effort suffered by the crew and their passengers alike, both recover forces stretched out facing the sun on the sandy beach of San Martin Island. An opportune rainbow, extended from the Brazilian coast to the soaked ravines of the Argentine side, paints the twilight with bright colors. Under the predominance of the green of the forest, flocks of hummingbirds, toucans and thousands of butterflies contribute to the chromatic festival, which extends to the gaudy red of the flowering ceibos, the yellow of the perobá and the coppery shade adopted by the cupay, More late, the night walks in the light of the full moon exhibit this magnificent shelter of nature through its profusion of sounds and perfumes.

The Aripuca
The restless Otto Waidelich, a member of Andresito’s German immigrant colony – a town near Iguazú surrounded by seven nature reserves – had no better idea than to recreate on a giant scale the wooden trap that the original Guarani people used to hunt birds. For this, he used thirty logs lying in the jungle, 200 to 500 years old. In total, the work of 17 meters in diameter and 30 meters in diameter is sustained by 500 tons of thirty of the two hundred varieties of wood counted in the jungle of Misiones.
Before being reintroduced into their natural habitat, here they live a period of healing and recovery. There are intimidating birds of prey (such as hawks and eagles), toucans, turkeys, parrots, cay and carayá monkeys, melero bears and many more birds than you can imagine. The thick vegetal mantle of forty species of trees protects the installations, to which many animals arrive very deteriorated, as a consequence of accidents that suffer in busy routes, mistreatment or neglect on the part of people who seize them and confine them or were confiscated from the hands of traffickers. The protected landscape was the most suitable site that naturalists Jorge Anfuso and Silvia Elsegood found to start their delicate mission in 1997.

The Garden of the Picaflores
A few steps from the center of Puerto Iguazú, Marilene “Mary” Moschen proposes a walk in the most familiar environment possible: the garden of her own house, where the cloying fragrance of 150 species of plants attracts at all times more than 50 birds of seven varieties of añumby (hummingbird). In winter many more birds are characteristic of the Atlantic forest (covering Misiones and part of Paraguay and Brazil) and the figure and the shrill sound quadruple.
The ideal moment to enjoy this magnificent show of sharp trills and low flights is between 4 and 6 in the afternoon, when birds flock to peck bromeliads, Chinese roses and lanterns. Leandro Castillo, the son of the housewife, never ceases to be surprised by the interest shared by expert ornithologists with babies and children. Her mother brought the idea of ​​her original land (the rural area of ​​Sao Miguel do Oeste, in the state of Santa Catarina, Brazil), where a multitude of birds perched on their native plants and bonsai and she fed them with sugar nectar .

The Argentine Experience
On the Avenida Brasil, two blocks from the busy intersection of Tres Bocas streets, The Argentine Experience has just introduced a high-end proposal amidst the shrill sounds fired by the popular stores and the massive dining halls of the center. The idea of ​​the creators of this unusual restaurant, inaugurated in the middle of last November, is to share an exclusive dinner in a room with a maximum capacity of thirty people, while the menu combines food with a detailed explanation of uses and customs deeply rooted in the Argentinian culture.
From start to finish, the dialogues between guests and hosts take place in English. Dinner starts promptly at 8pm, every night from Monday to Saturday. The customers are treated to Torrontés, Malbec and a blend, but everything arrives at its time. The first step is provided by the Malabeca welcome drink (mixture of pisco, malbec, lime and apple juice) accompanied by fried manioc. Afterwards, the diners put on an apron and hat, since they also have to demonstrate their skills as a cook. In an entertaining and didactic atmosphere, they are served pacu with Torrontés wine and they are taught about the repulgation of the empanada. Each one prepares his own with meat cut with a knife and surubí and then -while parading an opulent mince, tenderloin with rosemary sauce and desserts-, the instructors-waiters explayan on the “juicy”, “very juicy”, “a point “and” well cooked “, the best way to prepare the mate and the secrets of alfajor.