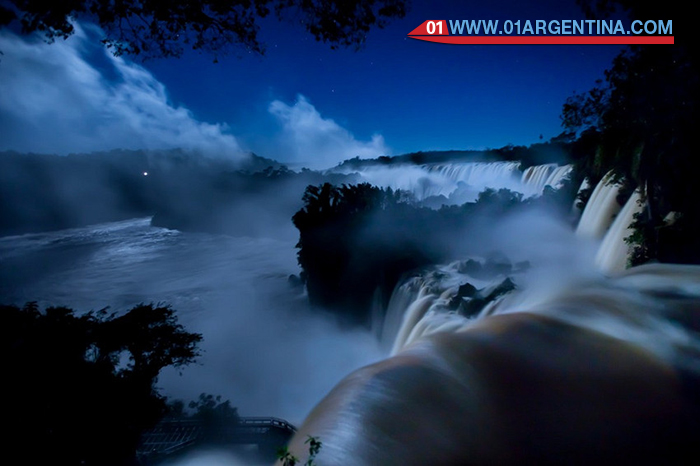 It is an almost unique ride in the world; It is a two-hour tour in an ecological train; then a walk of 1100 meters along the walkways to the monumental waterfall

Puerto Iguazu – Iguazu Falls in the day rainbow looks and sometimes even at night. The haze and the almost constant against the Devil’s Throat, at the falls of greater volume in the world, crossed by the light of the full moon, drizzle at times gives a soft version of those very colors of the days when it rains sun .
At six in the evening and begins to hide the day at the Iguazu National Park. Some routes are already closed to prevent tourists overtake the night in the jungle, a combination that seems to generate some mystery and some threats. For example, the Macuco trail, a walk seven kilometers inside the jungle, accessible only to the fifteen.
He is the first star but is not a full night. The stage is almost ready to start. Not a cloud in the clear sky. Moon. “Come for a single night in the world: walk around the Falls in full moon”, promoting a poster in front of the kiosk where tourists are held. The lucky ones will be organized into three groups, the last of which will end after midnight this exotic experience. The traveling is eager extraordinary, something different from their everyday world of repeated scenarios. They are always full quotas.

– “Falls welcomes you to this almost unique experience in the world.”

– “No there is no moon walk, so we will appreciate the most”

On the ride advise against using cell phones, and text messages, alerts WhatsApp, Twitter or Facebook are distracting sounds and lights at night offering the most diverse sounds and lights during this experience extremely unusual.
80 percent of the animal is nocturnal, but away from visitors and must sharpen the senses to perceive them. By this time passing in the forest deer, capybaras, mats (rabbits Forest), black weasels, jaguars. In the network of branches inhabited by bats and owls. It sounds a concert of different tones and rhythms of frogs and toads. All this happens while the visitors are preparing to march on the Devil’s Throat.
The walk begins with boarding the train (the trip takes 20 minutes to the station Throat Devil); there a walk of 1100 meters by the delta of the Iguazu River in its upper path to the greatest park the falls start. Falls are the result of a river which rises in Brazil, near Curitiba, falling over one thousand kilometers and gather between 40 and 60 small tributaries; all that water rushes through a canyon and called the Iguazu Falls and ends its journey in the waters of the Parana River.

The Iguazu National Park is one of the most important parks of Argentina ‘was created in 1934 and is home to 67,000 hectares of highly endangered. It has the highest biodiversity in the country: that is home to the largest number of animal and plant species. Something that worries environmentalists: deforestation which for years was in Brazil, Paraguay and Argentina. There were a million square kilometers of highly endangered and today are 60,000 small plots, 6 percent of the original forest.

– “As visitors know they have a responsibility to visit Iguazu falls This is a loan from our children and the idea is to keep it preserved for future generations.” Say the guidelines.

The train is environmentally friendly, gas works to go into the jungle without damage it. The machine passes quietly, to no more than 20 kilometers to avoid a collision with an animal that can walk on the path of the train.
The night scenery is drawn with shades of gray, black and silver. The shade of the trees on the lighted walkways, the reflection of the moon on the shimmering water, the humidity of the jungle undergrowth, unknown aromas, the sounds of the leaves of the trees, some movement in the water when it passes through the catwalks.

– “The birds are not seen but heard,” said one of the guides when it suggests a quiet walk.
In the water there, although not see at this time, birds such as herons and kingfishers, also divers like otter and turtles. All offer sounds for walking attentive.

By day, however, yes butterflies, even passing with visitors on the train are, settle on clothing, arms, in backpacks. They seem tame. Walk in colorful patches: metallic blue, velvety black, yellow with black, red and green. Day woodpeckers, swifts cascade (taking refuge and nest behind the curtains of water), fresh market corn parrots, monkeys I fell, coatis are also seen. The latter are the show park: at first fall friendly but become annoying, always looking for something to eat.

One of the guides explained that years ago tourists began to give food to the picturesque coatis because they found their approach; passing could take pictures. That’s how these wild animals, whose power base was getting roots in the forest, they realized that they could get food easily. They started to change their habits and expert hunters nylon bags in which food became smell. A biologist investigated for one year coatis the park and found a very serious problem: these animals were dying of cholesterol junk food they consumed. Since then, there is an awareness campaign so that tourists do not feed them. We must retrace the path damaging years.
Visitors accustomed to be so dependent on sight, do not find it as easy to detect traces of animals by the sounds they make. The walk has its magic, especially in the walkway in front of the Devil’s Throat. That immensity of white water, similar to silver depending on how you give the light of the moon, is sublime, indescribable. A photographer take pictures with a tripod and a professional machine and sells,

– “Do not forget that the moon was always inspired poets and artists. Be inspired you,” Denise invites another guidebooks.

In return the La Selva restaurant, located in the park, which greets visitors with grilled meat from a variety of other dishes that everyone can serve. After the exotic experience of moving clammy to the moonlit forest, it is celebrated around the familiarity. 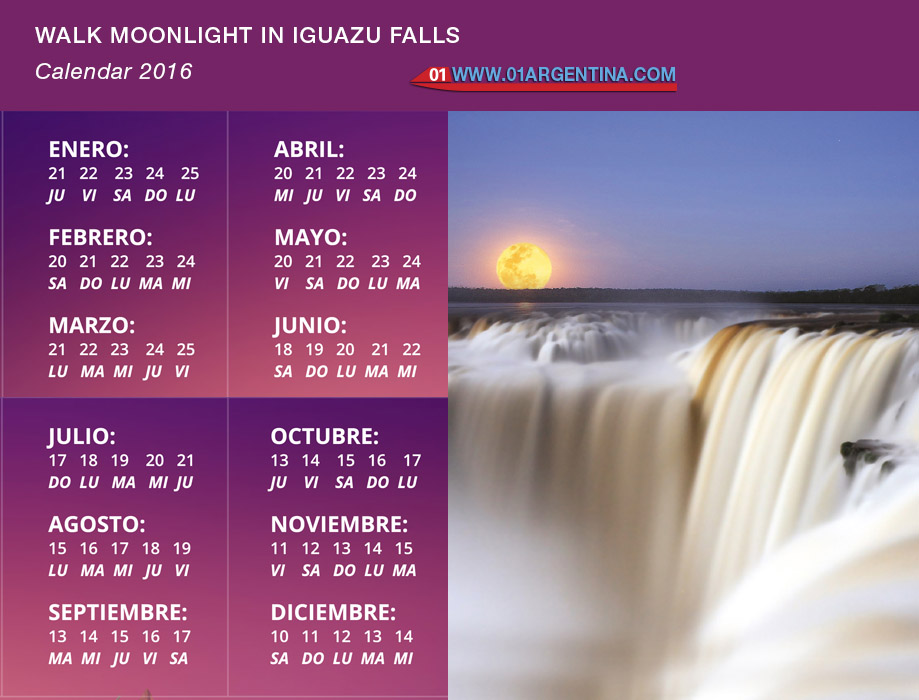 The brightness of the moon allows rides for 5 nights per month, which is set according to the departure times of the moon. The excursion in the light of the moon can be hired at the offices of Iguazú National Park (Argentina) or in various travel agencies in Puerto Iguazu.
All trips with full moon visitors are accompanied by guides and rangers. Groups are small and to better enjoy the ride are requested not to make noise, cell off and avoid using flash cameras.
The circuit is visiting Devil’s Throat, which is reached through ecological train. From the train you can see nocturnal animals such as mountain goats.
There are three shifts to take the ride.
The walk has the option of with or without dinner.

The tour takes about 2 hours.

Public transport to moon
There are collective (company Rio Uruguay) that make the trip from Puerto Iguazu National Park for those who will make the walk with full moon. There is a service that combines with each turn of the ride.