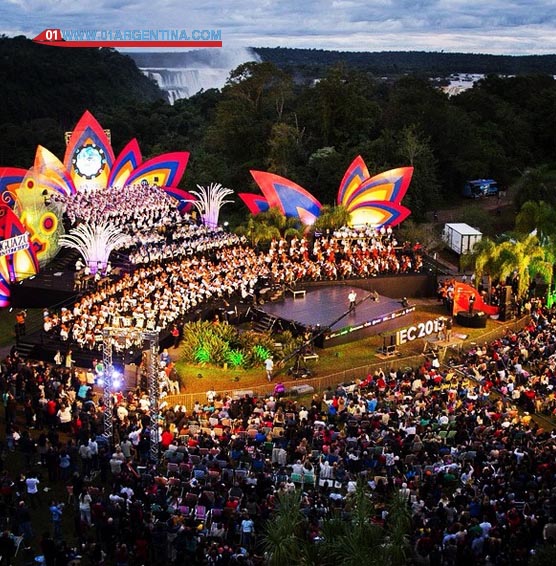 Iguazú in Concert is an international festival of child and youth orchestras and choirs.

700 children and youth from 5 continents making music together in one of the most beautiful natural scenery in the world: the Iguazu Falls and the Misiones rainforest in all its glory.
The IDEA initiative and organization of the Province of Misiones through the Ministry of Culture, Education, Science and Technology, with the support of the Federal Council of Investments (CFI) – seeks to promote the natural attractions and strengthen the cultural offerings of the region.

For 6 consecutive days, free concerts will take place in the best hotels in the region of Iguazu La Aripuca and the amphitheater of Puerto Iguazu; to which in 2013 the Praça da Paz joined in Brazilian territory and in 2014 the Takuapu space with capacity for 2,500 spectators.

To close the festival, concert Iguazu says goodbye with one last mega-concert in the gardens of the Sheraton Hotel inside the Iguazu National Park. A start amazing scene that brings together orchestras, choirs and soloists invited on one stage with the Iguazu Falls as a backdrop.

In 2014, the festival was attended by Susana Gimenez as a special guest and ambassador of IEC. In 2013, Iguazú in concert featured Elena Roger as a sponsor of the event. She made several performances throughout the festival, including his performance in the final concert with the 700 children and young people playing songs like “Do not Cry for Me Argentina” and “La Pampa de los guanacos”.
In 2012, Gustavo Santaolalla was the godfather and one of the directors of the final concert, which had a repertoire of film music filmographic touring the great songs of all time. Iguazú in concert has received representatives from countries around the world including China, US, Russia, South Africa, Germany, France, Italy, Brazil, Mexico, Australia, Spain, Costa Rica, among many others.

Each orchestra, choir or soloist called chosen through an exhaustive search by the Artistic Director of the festival by Andrea Merenzon, recognized nationally and internationally in its field and winner of a Latin Grammy 2005.

Stories about Iguazu in Concert 2015

Maria Andreeva was fifteen and received the best gift. Russian teenager received a standing ovation after a few minutes of the Iguazu have started in concert when he took the baton of the great intercultural orchestra six years ago is part uninterruptedly. Violinist, pianist, singer and now director. It is the picture of the evolution of the musical that is already a registered mark Missions to the world.
Maria is known for its excellence, but behind each of the faces of these 800 children from all continents, there is a story of passion for music that is expressed from the early years. The joy of laughter is contagious and when everyone takes his instrument, it is impossible not to get excited by the perfect combination to forget the various, different cultures and even antagonisms in their countries of origin languages.

Spasiuk Chango, the missionary artist who also dazzles the world with his accordion, was the godfather of the sixth edition of Iguazu in concert. Man of mixed cultures, fit perfectly in juvenile mortar and even went almost unnoticed by the magnitude of a show that each year surpasses himself.
The sixth edition of the show organized by the Ministry of Education Mission, supported by the Federal Investment Council and UNICEF Argentina, was a journey through time and cultures. It started with Zarathustra by Richard Strauss for the first time, a group of Korean boy came to Iguazu Falls to bring their ancient culture and a choreography with fans that was the big colorful note in the afternoon.
The rain on Saturday was just an anecdote. Sunday dawned cloudy but showtime, the Sun was seen and the music sounded to wonder about five thousand people who took a clean sweep the gardens of the hotel is at the foot of the falls.

Mariachis arrived there, Greek music, the country the United States, the marimba of Africa, European and Asian musicians, residents of Brazil and Peru, musicians from other multiple countries and ballet Colon Theatre, as this year, plus She dances and musical performances partner joined.

Daniil Bulayev is 10 years old and came from Latvia. He won the solo concert Iguazu Audition and dazzled on stage. With unusual ease, he started the first applause with the violin. But it was just a sample. He took the stage her dance partner, Veronika Antoscenko, a year younger. And everything exploded. The couple started an intense dance ovation after a crazed rock and Elvis could have danced better. Endless applause rewarded the choreography that was spiced by the sympathy of the two children, jealous of anyone who likes dancing.
The joy continued with Mambo and the first excitement came with El Condor Pasa, as a prelude to the entrance of the Chango Spasiuk, the missionary artist who brings music of these lands around the globe. This time he had to be the best man and his accordion docked with hundreds of instruments played by perhaps hundreds of boys dream of being the exponents of their cultures as is the apostoleño musician.

Chotis “Straw Hat” disk Tarefero My Payments, was chosen by Chango to close its participation in the Iguazú in Concert. Choice that represents their own mixed, as the combination of skin, cultures, voices, languages ​​and laughter, which were deployed on the biggest stage roots.
After the exciting match between experience and youth, it was time to say goodbye with a classic Maria Elena Walsh that anticipates the seventh edition to be held between 23 and May 28, 2016: “Let the kids come.” 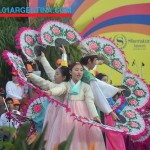 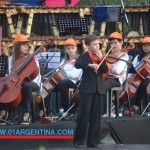 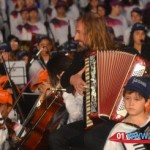