With a repertoire of emergency and 700 small giants of music from five continents closed the final concert of the fourth edition of “Iguazú in Concert” in the gardens of the Hotel Sheraton. 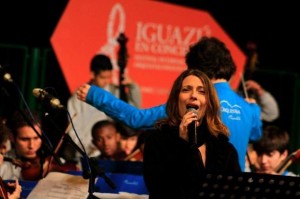 With the backdrop of the beautiful Iguazu Falls and a massive turnout of people, completed the world’s largest youth recital, closing the same Elena Roger, godmother Iguazú in Concert 2013, who with his dazzling voice played several songs from his varied repertoire, under the direction of Andrea Merenzon.

Thousands of people settled in the gardens of the Hotel Sheraton, to enjoy Iguazu closing concert, which had been suspended on Saturday because of bad weather.

The Grillitos Symphony, made great final show hosts. He performed the band St. Thomas Episcopal, United States, who interpreted issues Scottish tradition, wearing traditional skirts, recreated for a moment the battles for the independence of Scotland from the UK.

The String Quartet Curucova University Adana Turkey, hit the stage with a quartet of Mines queinterpretaron milonga La Cumparsita and to the surprise of everyone present.

The brothers Joshua and Oscar Han (violin and piano), of Australia, and Russia’s Maria Andreeva, (13) polular dazzled the audience that applauded fervently.

He closed the show the excellent actress and singer Argentina and godmother of the festival, Elena Roger, who after his masterful interpretations of excenario down with tears in his eyes and said breathlessly “was a success and I’m very excited.”

Notably, one of the highlights of the end of the fifth edition of Iguazú in Concert, was the interpretation of the Wall, the famous song by Pink Floyd.